For nearly two decades, the Company of Heroes series has been defining what it means to be an action-packed real-time strategy game, covering multiple fronts of World War II and shining a light on the stories of the real people who lived and died throughout each conflict. Xbox has always been a great platform that respects the RTS genre, with classics like the Halo Wars franchise and The Lord of the Rings: The Battle for Middle-earth II. That’s why we’re excited to announce that, for the first time ever, the series lands on Xbox Series X|S with Company of Heroes 3 Console Edition.

You might be wondering: How exactly is developer Relic Entertainment building an RTS game for Xbox, when historically the genre has always leaned on PC’s mouse and keyboard? Thankfully, Company of Heroes 3 Console Edition is being built from the ground up with console in mind with a wide array of new features that’ll make you the most effective commander on the battlefield, while sacrificing none of the features that fans of either platform will expect. Whether it’s the shores of Italy or the vast deserts of North Africa, we’ve got you covered when you’re playing with controller.

Check out the video below for a first look at Company of Heroes 3 Console Edition in action:

Longtime RTS fans know that one of the genre’s biggest hurdles is how quickly you can be overwhelmed if you’re not playing smartly. Chief among Company of Heroes 3 Console Edition’s new features is the Full Tactical Pause, which can dramatically alter the course of a skirmish in a split-second, and lets players play at their own pace.

“RTS games are complex by nature,” says game designer Andy Fedorchuk. “The challenge was giving players easy access to the tools they’d expect to have. How can we best set people up to perform the core actions of RTS gameplay easily?”

Like the name suggests, Full Tactical Pause allows you to pause the action at any point in time, giving you a precious moment to analyze the battlefield for threats or opportunities and then issue commands. Notice your infantry are being flanked? Pause and set up an order to reposition them to better bolster their defense. Does an enemy tank have its vulnerable sides exposed? Set up an order to blast it with your own tank or anti-tank infantry. Everybody loves it when a plan comes together.

With the number of units, tactics, and resources you have to keep track of in most RTS games, you’d be forgiven for thinking the genre could only work with a mouse and keyboard. However, Relic Entertainment has built Company of Heroes 3 Console Edition from the ground up with controller support in mind, and made a few changes that we think players will enjoy. Chief among these changes is the new radial menu, which lets you easily select a unit’s command.

“Getting the controller layout in a good spot was a lot of playtesting and iteration on what felt like it HAD to be there,” says Fedorchuk. “We thought a lot about what actions players would be making most frequently, and set up units of different types to have their most commonly used actions readily available. It’s a bit like trying to predict future actions.”

Still want to use mouse and keyboard on Xbox? Relic is also supporting that from day one, too.

Last but certainly not least, Relic has reworked the game’s user interface to make things even more comfortable for console players who’d rather sit back and command with a controller.

Eagle-eyed viewers might notice the lack of a command card in the bottom of the screen on the console edition. It made sense to remove the command card for consoles, since those players won’t have a mouse to individually select commands.

Instead, players can use the left trigger to quickly pull up the command wheel and push the thumbstick in the appropriate direction. Let’s say you want to demolish a house currently being occupied by enemy forces. Select a group of engineers by drawing a box over them (which grows from the center of your screen the longer you hold the button, if you want to select multiple units), press the “move here” command, then open up the radial wheel and select the “satchel charge” command and select the house. Then watch in wonder as the building bursts and crumbles to pieces, eliminating the enemy infantry inside.

That’s of course not all that  the game brings to the table, but we’re excited to show ourXbox fans more in the coming months. Company of Heroes 3 Console Edition is out on Xbox Series X|S in 2023. 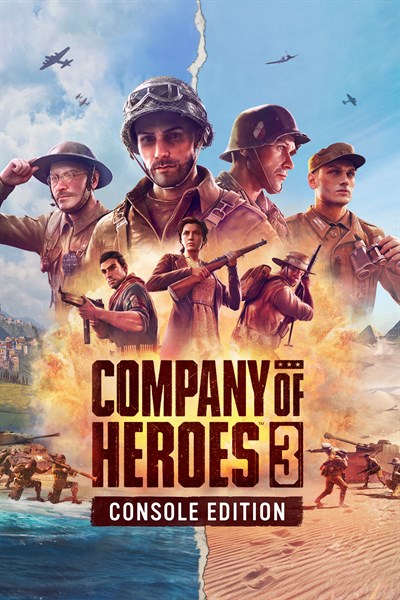 Steam Base Building Fest is almost over – get in on the deals and demos while you can
New Mario Bros. Movie Footage Shows Off Seth Rogan As Donkey Kong
Turn 10 Studios Gives A New In-Depth Look At Forza Motorsport
Guide: Best Spin-Off And Crossover Games On Switch
AMD’s Ryzen 7 5800X has dropped to £200 on Amazon UK